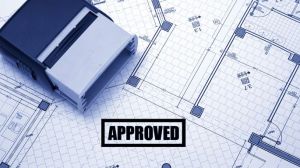 Do you need a building permit?
Spoiler: You probably do, unless you’re only doing cosmetic interior upgrades, like painting or updating your kitchen faucet. Any time you are adding square footage, making structural modifications, or significantly altering other building components, you’ll need to obtain a permit.
And don’t think about trying to sidestep the question. Doing the work without a permit is just a bad idea, for a number of reasons:
• It might be hard to sell the house if you can’t show a permit for your work.
• A lender can refuse to grant you a mortgage if you have un-permitted work.
• Your municipality could apply fines or penalties.
• You might have to do the work again to bring it up to code.
• A home appraiser might not include the un-permitted work in a future appraisal, lowering your homes value.
In other words, renovating without a permit is just not worth the risk.

How to get a building permit
The great news is that getting a building permit is easier than you think—mostly because you probably don’t have to do it yourself. Unless you’re a pretty slick DIY-er, chances are good that your project is going to require an architect, and that’s the person to rely on for the building permit process. An architect will know the ins and outs of the process for obtaining building permits in your local area, and they’ll also know exactly which permits you need, from structural to electrical to plumbing.

If you are doing the work yourself, then you’ll need to get your own building permit, which will involve drawing up and submitting plans. For a relatively simple project, check with your local building permits agency to see if they have suggested plans. Most local jurisdictions have developed online checklists that help you understand and plan for the process.

Your first step to determine how much a building permit will cost should be your local building permits website; most will have a fee schedule. The good news is that the upfront permit price will cover all additional inspections that the regulatory agency will make as the work progresses, including the final sign-off.

Any work done under permit usually requires one or more inspections to be performed by licensed inspectors, to verify the work was done according to code, the plans on file, and any other requirements. The local building department will have all the information you need to make sure the inspections are scheduled appropriately.

How long does it take to get a building permit?
The timeline for getting a permit will vary.

Most jurisdictions will allow a permit to be pulled the same day for relatively simple projects such as fences, plumbing, electrical, HVAC, decks, roofing, and small remodels. However, once you are significantly altering a structure or building an addition, the review process could take several weeks, especially depending on how many projects are ahead of yours. You should be given a ballpark timeline when you submit the plans.

Most permits require that work start within twelve months. And if you take a hiatus for more than twelve months, you’ll probably need an extension. However, if you are consistently working, the permit lasts as long as the job does.

Building permit paperwork to keep
Once the dust has settled—literally—on your renovation project, a final inspection will occur. After that, a final approval will be filed with your local building department. It’s always wise to get copies of the documentation, including permits and final approvals, for your own records. Having them at your disposal if you are selling the home is a great way to assure the buyer that any work was done correctly and verified by the local inspector.