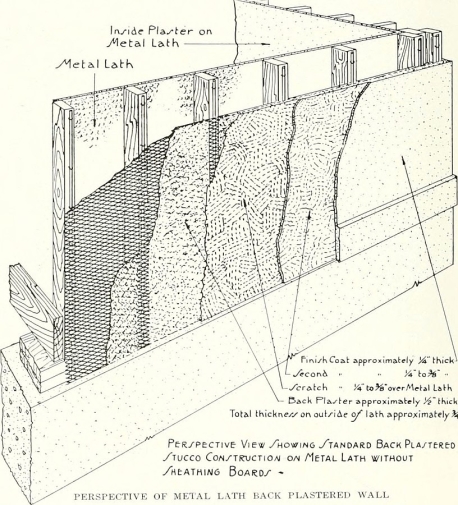 Description
Exterior cement plaster (stucco) is an exterior finish consisting of portland cement, sand, mixed with water to form a workable plaster. Admixtures may be added to for various purposes including workability. It’s advantages include utility, relatively low first cost, and minimum need for maintenance. Plaster can be a desirable facing material: hard, strong, and most of all, fire-resistant.

Application
Portland cement plaster is applied either by hand or machine to exterior and interior wall surfaces in two or three coats. It may be applied directly to a solid base such as masonry or concrete walls or applied to a metal lath attached to frame construction, solid masonry, or concrete construction. When applied to metal lath, three coats of plaster form a 7/8-inch total thickness. A vapor-permeable, water-resistant building paper separates the plaster and lath from water sensitive sheathing or framing.

Color
Color is determined by selecting cement and aggregate color, and quite often modified by adding mineral oxide pigments to the plaster mix. In many areas, factory-prepared finish-coat products are available. Pre-pigmented packaged cements also can be used to achieve the desired stucco color or pre-weighed mineral oxide pigments can be added to the finish coat stucco during mixing.

Fire Resistance Properties of Portland Cement-based plaster
Fire resistance is typically classified by a fire rating, but what kind of fire rating does plaster provide?

For example, a typical exterior wall assembly might be a three-coat system of plaster over 2-by-4-inch wood studs using metal lath attached to the studs, either with or without a layer of sheathing, like plywood. On the interior side would be a layer of gypsum board. The detail for a system made with these components is assigned a one-hour fire rating according to current California Building Code and most other model codes.

By way of another example, a three-coat system of plaster applied over 2-by-6-inch wood studs using metal lath attached to the studs, over a layer of 5/8″ Type ‘X’ gypsum sheathing, and on the interior side two layers of 5/8″ Type ‘X’ gypsum board is designated as having a two-hour fire rating, again according to current California Building Code and most other model codes.

Near-alternatives
A competent installation of exterior cement plaster should not be confused with the exterior insulation and finish systems (EIFS) or synthetic stucco systems that have become popular. Synthetic stucco consists of a polymer based laminate that is wet-applied, usually in two coats, to rigid insulation board fastened to the wall with adhesive, mechanical fasteners, or both. Polymer based (PB) systems, sometimes known as thin coat, soft coat, or flexible finishes, are the most common. Failure modes include: 1). moisture becoming trapped with the system and leading to degradation of adjacent materials including structural sheathing and wood framing, and, 2). moisture trapped within the system causing expansion of the substrate and therefor failure of the plaster cladding, 3). impact damage given that the plaster surface is too thin to absorb significant impact, and, 4). synthetic systems are not fire-resistive.

Portland cement-based plaster from an environmental perspective
It should be considered that production of portland cement carries with it extremely high embodied energy relative to alternative exterior plastering systems such as earth plaster or lime plaster. In the same context, portland exterior cement plaster’s durability means that it scores near the high end of the scale in terms of life cycle environmental costs.